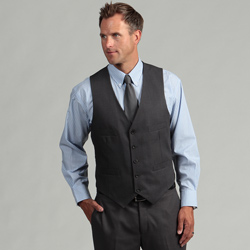 Men’s Vests are a fashion item that has seen a bit of a comeback lately. The trend has been to make it a more hip, casual clothing item rather than a stuffy old man’s suit accessory.

Vests Have Always Been Popular

The vest has a long history in men’s and women’s fashion. These wardrobe stables date back to the early 14th century when neither a respectable man nor woman was seen in public without one. Slowly it began to lose favor in the mid-20th century and was considered a relic by the early 1980’s.

Back in the Limelight

It seems vests have lost their relic status as today you see it on younger men in jeans and even a hat. Another clothing item making a comeback, vests come in a variety of colors and styles.

Of course, It’s very common for vests to be worn with suits. Some suits off the rack offer vest and any custom suit can be ordered with a vest. Next time you’re buying a new suit, see how it pairs with a vest.

Here at Shelton Clothiers in downtown Memphis we seek out unique, trendy items like that for our customers.  We see the vest becoming a fun clothing item for the foreseeable future not only for a casual fun look but moving back into the suit wardrobe. There has been some interest by manufacturers to bring it back into the fold.

Want to join the discussion?
Feel free to contribute!

What is Business Casual?[Infographic] What your clothes’ colors say about you.
Scroll to top